Reed: I don’t think the key is just to keep trucking and just keep, you know, talking about contact in UFOs and UAPs. And you know, it’s really to go beyond the question of what is happening, which we’ve researched for decades—all the phenomena associated with this—to get to the next question of what do we need to do about it? And I don’t hear people talk a whole lot about that, except you know, invite contact, surrender to the visitors, you know, which these are not reasonable next steps. Those do not arise from a rational mind. They are fundamentally irrational.

And so it feels like things are stuck. They’re stuck in this “what’s happening and the government needs to tell us, and the ET’s are probably here to save us or give us technology or heal the world and teach us things.” And so it’s like we’re stuck and we’re loaded with assumptions that we can’t get beyond.

I would advocate getting over that hump and then getting down the road of taking action regarding the Intervention.

I think the truth is so apparent that any reasonable thinking person who doesn’t want something and have their own personal agenda from contact can easily see this for what it is. I’ve asked on many different shows: “Tell me, show me one thing the visitors are doing—doing, not saying, physically doing—that signals a beneficial intent.” They’re flying in our skies unannounced. They’re taking people. They’re taking animals. They’re manipulating governments. They’re seeding all these disparate and false, well, competing narratives. They’re doing all of that. Okay, show me what they’re doing that signals a beneficial intent. And then some people say, “Well yes, people are being taken, but they made a soul contract before this life to be taken and they’re actually being welcomed back, you know, into their brotherhood or into their spiritual, you know, network, by being…” It’s like okay, that is not a reasonable statement of fact regarding how people are being taken. That is an association that’s being made because somebody wants something from this; they want it to be good. They’re trying to twist an actual physical event to be good when it’s obviously not good.

And so I personally have kind of reached my limit of tolerance with the 50/50, you know, argument, which is: Well, they could be good; they could be bad. Some are good; some are bad. Some of what they’re doing is bad; some what they’re doing is good. It’s like, wow, you can’t see that there is an armed individual in your house, you know, taking your child now. How have you been so disabled that you cannot see that and act upon it?

The picture is abundantly clear. Probably they’re here to take what they want. They have an agenda. They’re working with different groups for different reasons; they’re not disclosing it. We the people have not been consulted. We’re not being told what’s happening, not just by government, but by the ET presence itself. All of that just points in a direction. But do we want to look in that direction? That’s another question.

Everyone has a desire to see things a certain way. And when something really new happens, you have to abandon that in order to see it. I mean you know, if a hurricane happens, but you really, really want it to be God. Everything that happens is God. God creates everything. Then you’re going to call a hurricane God’s wrath. And that’s really unfortunate, and that is not the logical other side of the coin. That is not the other side of the argument. That is an assumption leading to delusion. 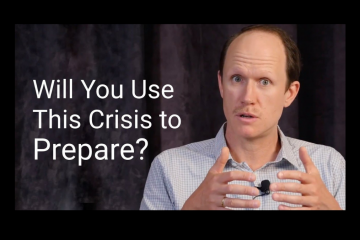 Will You Use This Crisis to Prepare?

We’re gonna go through something big. And you need to make it because you are a person of promise. You have a higher purpose for being in the world. You have gifts to give to Read more…